I write to you this February to share the latest news of my ministry and Friends Theological College (FTC).

At the beginning of this month, on February 1 and 2, I was privileged to attend the Friends United Meeting/Africa Board meeting, at which the new FUM Board clerk was introduced and also a new assistant clerk and recording clerk. The board meeting was well-attended, and all the Yearly Meetings were present. Each Yearly Meeting sent at least two representatives. The Board meeting took place at Bungoma, Kenya.

Additionally, from February 15-20, I traveled to Samburu with Eden Grace (Global Ministries Director), Ken Saina (FUM Business Manager), Getry Agizah (Friends Church Peace Team), and Emily Provance (New York YM). Starting the morning of February 15, we visited Upper Hill Loko, where the first clinic in Samburu Friends Mission was constructed. Destroyed during a political conflict in 2007-2008, there is only a shell left there with the buildings deserted. However, it was encouraging to see the life that has started returning to the area. The local government put up a learning center for early childhood education, and the building also serves as a church for Sunday worship. Solar panels were also installed, and the children are able to use solar power for anything they need. 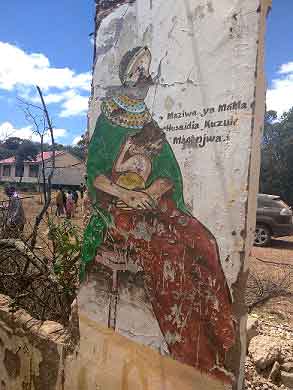 A fragment of a wall from the ruins of the Upper Hill health clinic, with the new church/school building visible in the background. The caption on the mural translates as “breast milk helps prevent illness”.

Later that same day, Sammy Letoole, Director of Samburu Friends Mission, and his team led us to another center, Lorian Friends Church, where great things are happening. The church first constructed there is now being used as an education center by the community; initially it was for early childhood development and is transitioning to a primary school that now has the first grade. With the church becoming a school, the church members are raising funds to put up a new building to serve as a church. The new building will have the capacity for 100 people when complete.

On February 16, we went to Loltulelei, which is now considered the main center of Samburu Friends Mission, where much activity has taken place. The new building has been constructed for the Samburu Friends Mission clinic and maternity ward. The clinic building was paid for by the mission, and the maternity ward was donated by the M-pesa Foundation. Eden Grace was a main guest and cut the ribbon to open the doors of the new clinic. 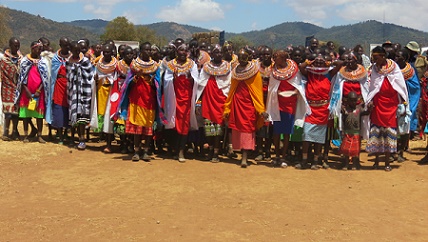 Loltulelei Friends Church women’s choir welcomes the guests to the opening of a new Rescue Center.

Also at Loltulelei, a huge function was held with members of the government and local leadership and principals from other schools invited. At a primary school under the care of Samburu Friends Mission, the doors were opened for a new dormitory for girls. Eden Grace and representatives from the Ministry for Education and from World Vision cut the ribbon for the new doors. The dormitory, built by World Vision, will accommodate about 100 students.

Eden Grace and the representative of the Ministry of Education cutting the ribbon on the new Girls Rescue Center at Loltulelei.

The local community elders consecrated the dormitory building in their local language with a traditional local blessing. The students were very excited about life returning to the community center, and all the children and everyone present was served lunch. The girls’ dormitory is designated as a “Rescue Center” for upper elementary school children because when girls reach fifth grade, their education is often interrupted by their parents, and they are forced into marriage. Through boarding school, girls can attend elementary school and high school without interference in their education.

A girl settles in to the new Rescue Center dorm.

On February 17, the Samburu Friends Mission Board meeting was held with discussion on the future of the Samburu Friends Mission. At the meeting, income-generating projects were considered in order to not solely rely on funding from Friends overseas. The resulting idea was to build some shops in a plot given to the Mission by the county government. The shops will be at the front of the street; behind will be rental houses for people to live in. Loosuk is the place where the shopping center will be located.

Also discussed at the Board meeting was the revival of the FTC satellite center in Samburu. I was very glad to see eleven pastors who had trained at FTC serving Samburu Friends Mission and to see, through the fruits that FTC labors, this engagement in mission work. I challenged them to train more pastors.

The plan is to revive a school-based modular program in Samburu, which will run in April, August, and December, with the goal to restart the program this next August 2018 if possible. In addition, we will have students who have graduated with the FTC certificate come to FTC Kaimosi for the modular diploma program during the holidays. There is one Samburu student, Rosina, who graduated from FTC with a diploma in October 2016 and is now waiting and ready to attend in September 2018 to begin her bachelor’s degree program.

On Sunday, February 18, we attended worship at Loltulelei and were received well. I brought the message and spoke on thanksgiving, specifically giving thanks to God for all the developments taking place in Samburu Friends Mission.

On February 19, some of us stayed in Maralal town for another meeting on the further development of Samburu Friends Mission. Getry Agizah, Emily Provance, and Christopher Leaduma went to Baragoi to visit the Friends peace program in that place of chronic violent conflict between Samburus and Turkana. I was initially going to accompany the team, yet I unfortunately fell ill and could not join. On the morning of February 20, everyone returned from the trip to Samburu.

Samburu is a place that I have wanted to visit to see the progress of the projects there. Also, I was grateful to be able to follow through on my objective to see FTC graduates there and was energized in seeing their work and ministry.

Thank you, Friends, for all your support and prayers as the blessings in my ministry overall and at FTC continue to unfold.

To subscribe to Robert Wafula’s email newsletter, please go here. You can also see a list of past newsletters by going to this link.